Partnering for better patient outcomes – “It’s in our DNA”

Brooks Rehabilitation has a long history of partnering with other organizations, ranging from clinical, research and academic institutions to national nonprofits and local community groups. For Doug Baer, Brooks Rehabilitation CEO, and Michael Spigel, President & COO, partnering means accomplishing more with and through others – with the sum of the whole ending up greater than the sum of the parts.

“Brooks has a partnership mentality,” said Baer. “It’s in our DNA. As the major provider of rehabilitation and other services in this region for all types of customers and providers, we’re in a unique position. We’ve maintained our independence, allowing us to form partnerships and collaborations across a wide spectrum.”

“We developed academic partnerships to both fulfill a need in the marketplace and a desire by all parties to have the best trained clinicians,” said Spigel. These include the University of North Florida Brooks College of Health for nursing and physical therapy and the Jacksonville University Brooks Rehabilitation College of Healthcare Sciences for speech-language pathology and occupational therapy.

“Partnerships with Japan’s Cyberdyne, Inc., and its Hybrid Assistive Limb (HAL) technology at the Brooks Cybernic Treatment Center, and The Green House® Residences (see page ____) and its new models of care at our Bartram campus both developed from our values of innovation and excellence,” said Spigel.

“Brooks brings expertise, specialization, big data, a large patient pool, a continuum of care structure and a highly respected brand to our partners,” said Baer. “We look for partners that understand and appreciate our mission, have a commitment to excellence and want win-win situations.”

Baer and Spigel believe that the use of partnerships will increase in the coming years. They think the partnerships of the future will be more creative and innovative due to the changing business and reimbursement environment.

“Partnerships are hard work. We don’t take them for granted and always look to grow and develop them,” said Baer. “The ultimate goal of any of our partnerships is better outcomes for our patients.” 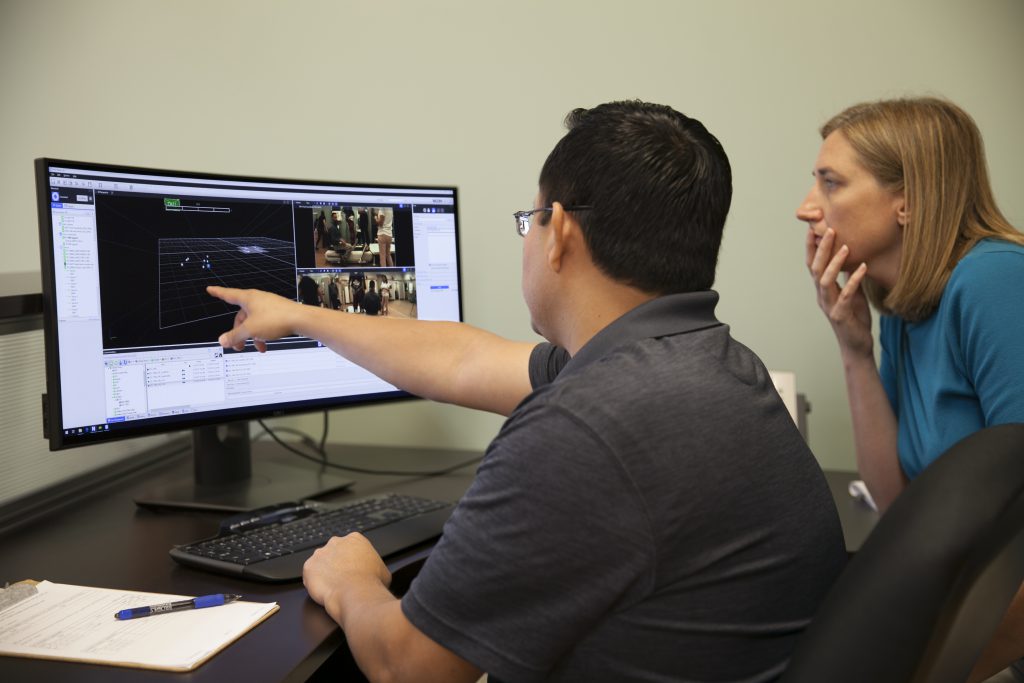 One of Brooks’ main partnerships is with the University of Florida College of Public Health and Health Professions (UF-PHHP). Although the two organizations had been carrying on research activities together for years, a common vision to advance clinical rehabilitation led to the creation of a formal partnership – the Brooks/UF-PHHP Research Collaboration – in 2013. Merging the strengths of a major academic research institution with those of a comprehensive rehabilitation system serving a large, diverse patient population is a rare, but powerful, combination. The Collaboration, which has entered its seventh year, has generated more than 100 publications and $4 million in grant funds.

“Before the Collaboration, no one had ever held simultaneous positions like this at Brooks and UF,” said Dr. Fox. “But we were empowered by leadership on both sides to make it work. An overall goal of the Collaboration is to create a greater understanding and appreciation in the academic world of patient-oriented clinical research, while engaging and encouraging clinicians to think about their patients with scientific curiosity and to promote use of evidence in clinical practice.” 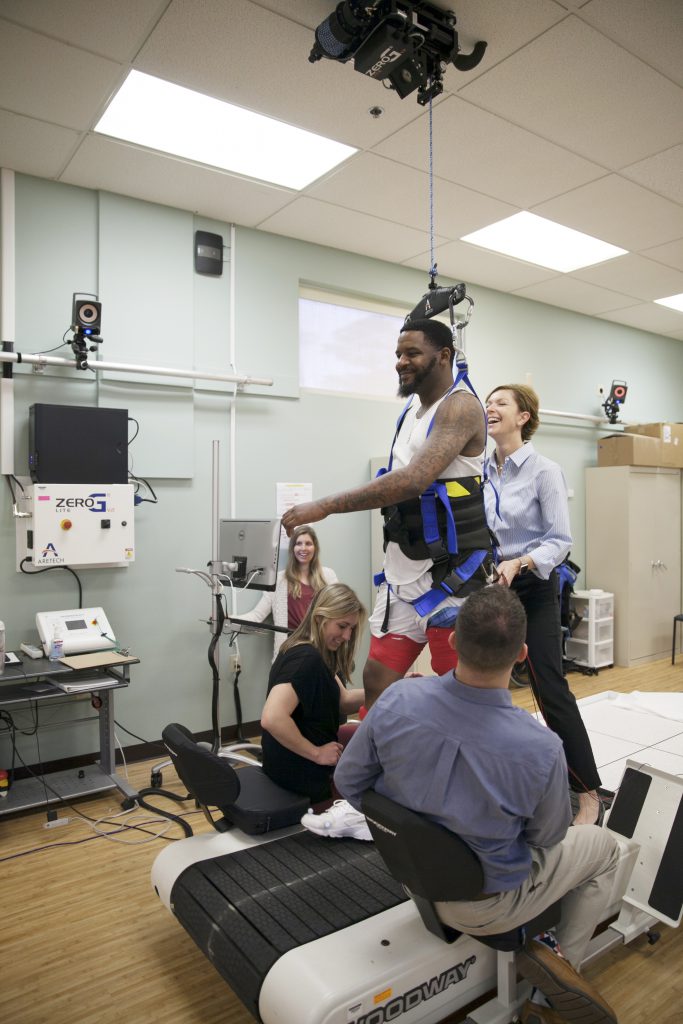 Dr. Fox works to create a shared vision and cohesive environment between team members at both locations. “I got great advice early on that helped me shape what we’re doing,” said Dr. Fox. “It was: ‘I do one job.’ I just happen to be employed by two institutions. And that one job is to lead impactful clinical research. I leverage the talent and resources at Brooks and the talent and resources at UF to do that job to the best of my ability.”

Two of Dr. Fox’s current studies focus on improving respiratory function – one through acute intermittent hypoxia, the other through diaphragmatic pacers. Both are novel interventions in research today.

Dr. Fox explains that Gordon Mitchell, PhD, a preeminence professor of neuroscience at UF-PHHP and co-leader of the funded study, has been researching the beneficial effects of AIH for more than 20 years. Previous AIH research shows that breathing low oxygen triggers a process that leads the brain to release serotonin. Serotonin helps strengthen neural pathways, which connect one part of the nervous system to another, and specifically strengthens motor neurons, which are responsible for activating muscles. Recent research involving walking shows that the beneficial effects of low oxygen are greater when paired with rehabilitation activities.

“Impaired breathing function is a leading cause of illness and death after spinal cord injury,” said Dr. Fox. “With the DoD-funded research, we will combine AIH with respiratory strength training – breathing rehab – to determine if that combination is better than either one of those by itself. The research also will help us test the effects of AIH alone, versus the benefits of strength training alone. We hope this will lead to more effective rehab strategies to improve breathing function and health in people with SCI.”

The research study will take place at the Brooks Clinical Research Center. The process to get the grant was itself an example of the Brooks/UF-PHHP Collaboration. “The DoD issued a call for new spinal cord injury research. Dr. Mitchell gathered a team of us at UF to discuss what research would be impactful and what our grant application would be about,” said Dr. Fox. “The ‘a-ha’ moment for me – in my role with Brooks – was making Brooks a key part of it. So, while the initial ideas and groundwork of the grant came from basic scientists at UF, the Brooks side answered things like how the study is going to roll out and work, what team members will participate, what patients will be seen, what will we be able to do – that is, making it all feasible. A lot of personnel and co-leaders on the project are Brooks individuals – like Dr. Tonuzi (Geneva Tonuzi, MD, Medical Director at Brooks’ Spinal Cord Injury (SCI) Program).”

Diaphragmatic pacers (DPs) use implanted electrodes to stimulate the diaphragm, making it expand and contract. DPs were developed two decades ago for spinal cord injury (SCI) patients who were on long-term mechanical ventilation (MV). DPs offer a better quality of life, addressing the main problems of MV, such as reoccurring respiratory infections and lack of mobility. When University of Florida Health Jacksonville (UF Health Jacksonville), a 695-bed, not-for-profit academic health center and hospital, implants DPs, the patients are often sent to the Brooks Rehabilitation Diaphragmatic Pacer Program for respiratory rehabilitation and weening from the MV to the DP.

In SCI patients who must go on MV, the diaphragm atrophies quickly – there is a large drop-off in its functionality even after just a few days. MV lets the patient breathe but does nothing to prevent the atrophy. Brooks Rehabilitation handles SCI respiratory rehabilitation and the potential weaning from MV to breathing independently, but this window of opportunity can be very short because of the diaphragm atrophy. 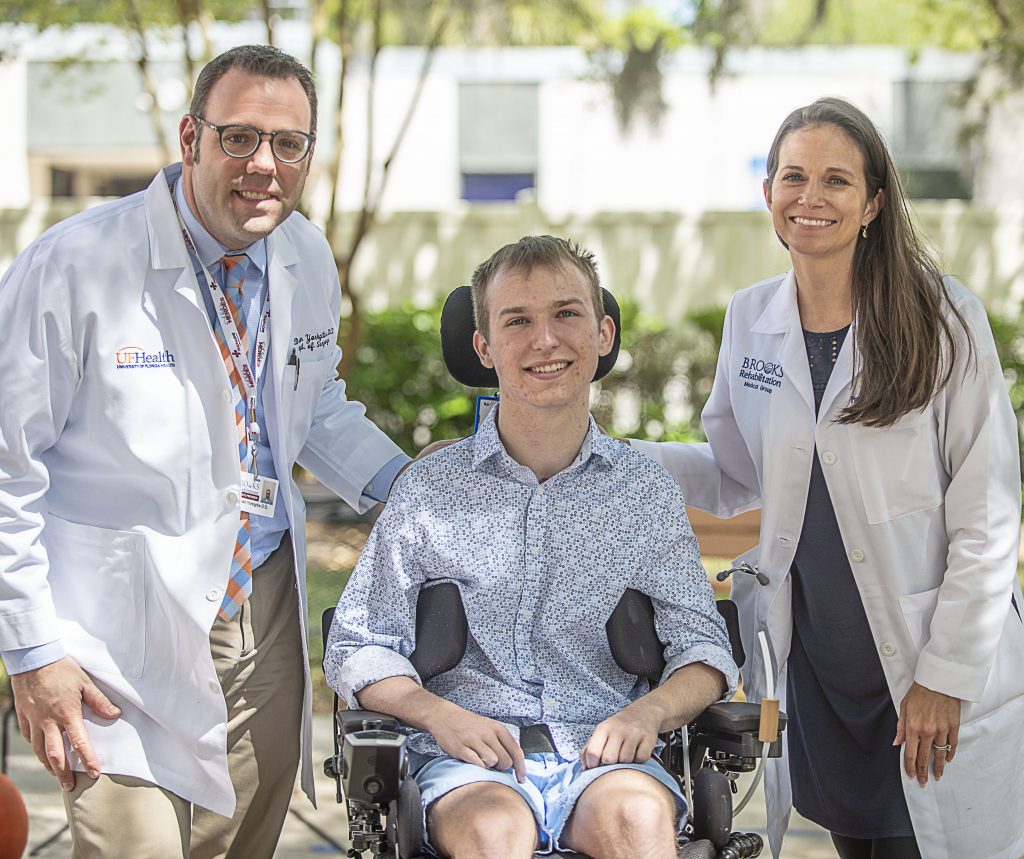 Generally, a patient was on MV for some time before being considered for a DP; that is, long after the possibility of the patient being weaned from MV to breathing on their own was over. Around 2012, physicians at UF Health Jacksonville, first Dr. Raymond Onders and later Drs. Andrew Kerwin and Brian Yorkgitis, explored implanting DPs much sooner than was done historically, in order to promote weaning from MV to the DP earlier rather than later. This would mitigate or avoid the negative effects of MV for the patient. Brooks Rehabilitation Diaphragmatic Pacer Program was now seeing patients from UF Health for rehabilitation who now had DPs much earlier in their process.

“We provided our personnel specialized training for these types of DP patients and had some surprising results,” said Geneva Tonuzi, MD, Medical Director at Brooks’ Spinal Cord Injury (SCI) Program. “There were patients who regained enough respiratory function that they were able to be weaned off the DP to breathing on their own. Since 2012, 24 of 26 targeted patients have been successfully weaned off DPs to breathing independently. It is an amazing quality-of-life outcome for patients who might otherwise have been on mechanical ventilators long term. All other DP patients reported gains in respiratory strength, less breathlessness and stronger voice control as well.” (See related article, “Q&A with Geneva Tonuzi, MD,” on page ____.)

From the clinical results, Dr. Fox has theorized that the DPs’ electrode stimulation – that expands and contracts the diaphragm – is helping to strengthen the nervous system as well as the muscle fibers that would have otherwise atrophied with MV. This has led to two new projects:

“The diaphragmatic pacer project is a perfect example of the value of the Brooks/UF-PHHP Collaboration,” said Dr. Fox. “Although it is a small program, it meets all the goals of our partnership. Clinicians and clinical programs are at the core of the work, patients are involved, and research is pushing new questions and ideas that we hope will lead to better outcomes. We’re all very proud of it.”