On October 21, 2018, Jalen Bryant and his girlfriend Holly Manuel were going to tailgate at a Jacksonville Jaguars game with Jalen’s employer. His boss gave him tickets to the game but Holly’s purse did not meet stadium regulations. They started walking back to the car to drop it off when the unthinkable happened.

Jalen saw a bunch of people and heard what sounded like fireworks going off. He turned and saw a car coming down the street and felt what he described as a hot poker hitting him. He fell to the ground.

Six people were shot by a drive-by shooter, including Jalen and Holly. 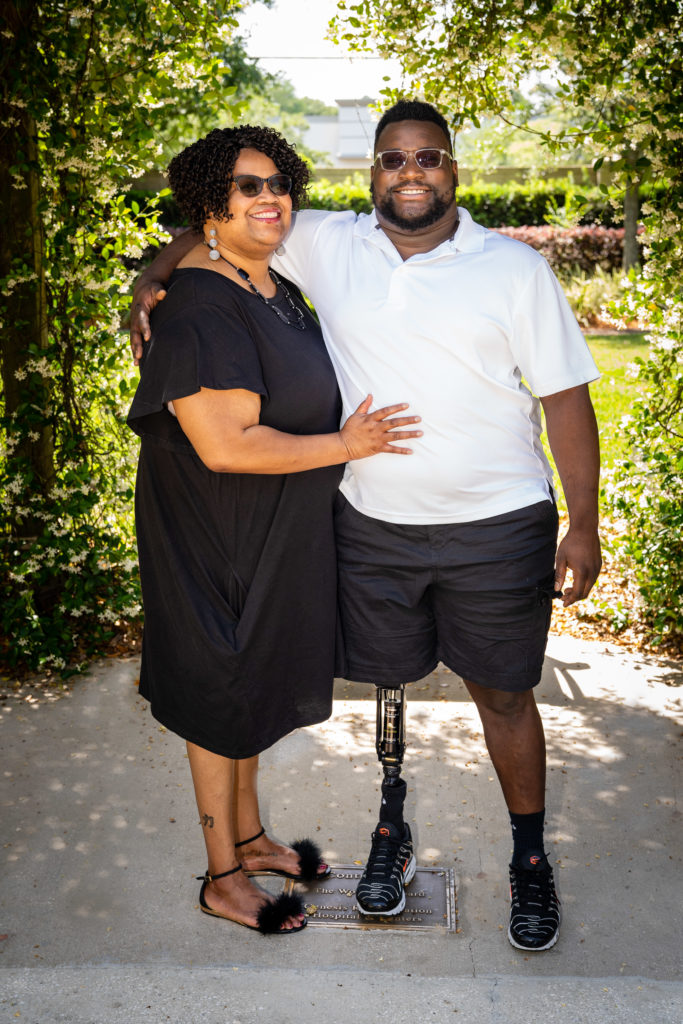 Jalen’s parents, Nikki and Xavier, were driving with their grandson when Holly called. “She started screaming ‘we’ve been shot!’ and I kept waiting for them to tell me they were joking. When that moment didn’t come, I panicked,” said Nikki. She began screaming, pounding the dashboard and calling for the Lord. Xavier took the phone, got the details and held Nikki’s hand as they drove downtown.

When they arrived at the scene, Nikki ran toward the police caution tape. Three officers stopped her and would not let her through because she was hysterical. Nikki’s sister who lived nearby and her husband spoke to the officers while Nikki prayed with three women who happened to be standing at the church on the corner.

They were told Jalen was alive and was taken to a nearby hospital. When Nikki and her sister arrived, the hospital was on lockdown. Nikki pleaded with the officers, “My baby is in there! You’ve got to let me in!” The individual that was targeted in the drive-by shooting was also at the hospital and police were concerned the gunman was in the area to finish what they started. Once they were allowed in, the family waited hours for some news. 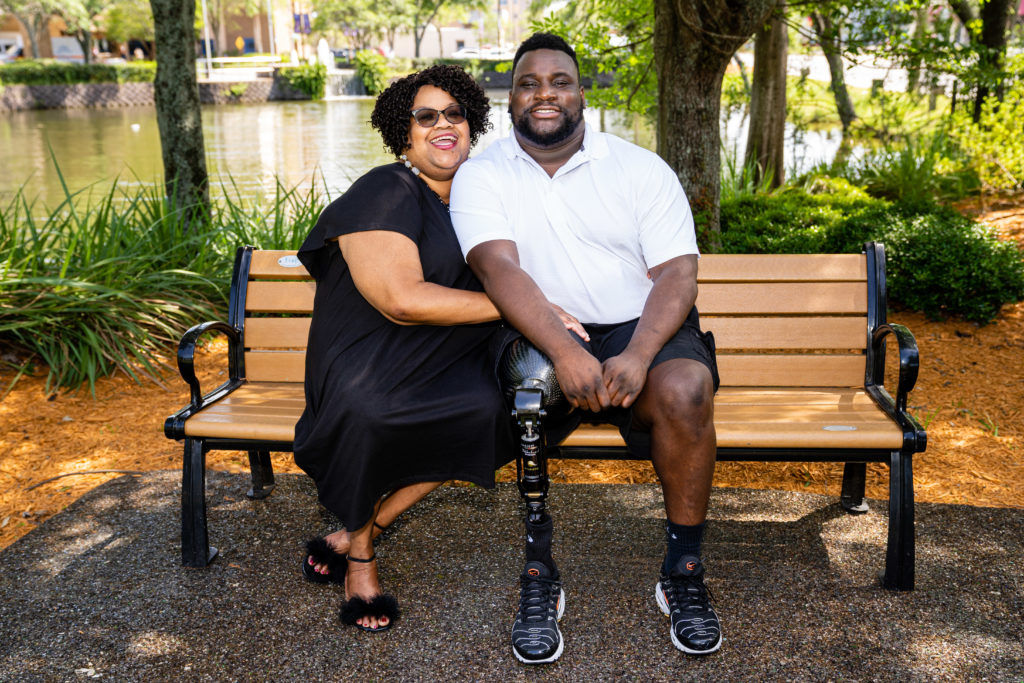 Eventually Nikki and Xavier were brought to a quiet room to wait for the physician. “I used to work at Shands. I know what happens when they bring you to a quiet room. It’s not good,” said Nikki.

Physicians explained that Jalen was shot five times – three in his chest, one in the bicep that punctured his lung and one that shattered his hip and severed his carotid artery. When he arrived, he was alert and talking but soon went into shock and his blood pressure dropped. They were able to stabilize him and get him into surgery.

Around 11 p.m. that night, the surgeon came to speak with them. “He looked beat and he said ‘Your son is strong. There is no way he should still be alive.’” Jalen had extensive wounds. He coded three times during the surgery. They had to leave bullet fragments inside his chest and put a shunt in his leg until they could get him stable enough for another surgery. The next 24-48 hours were crucial. 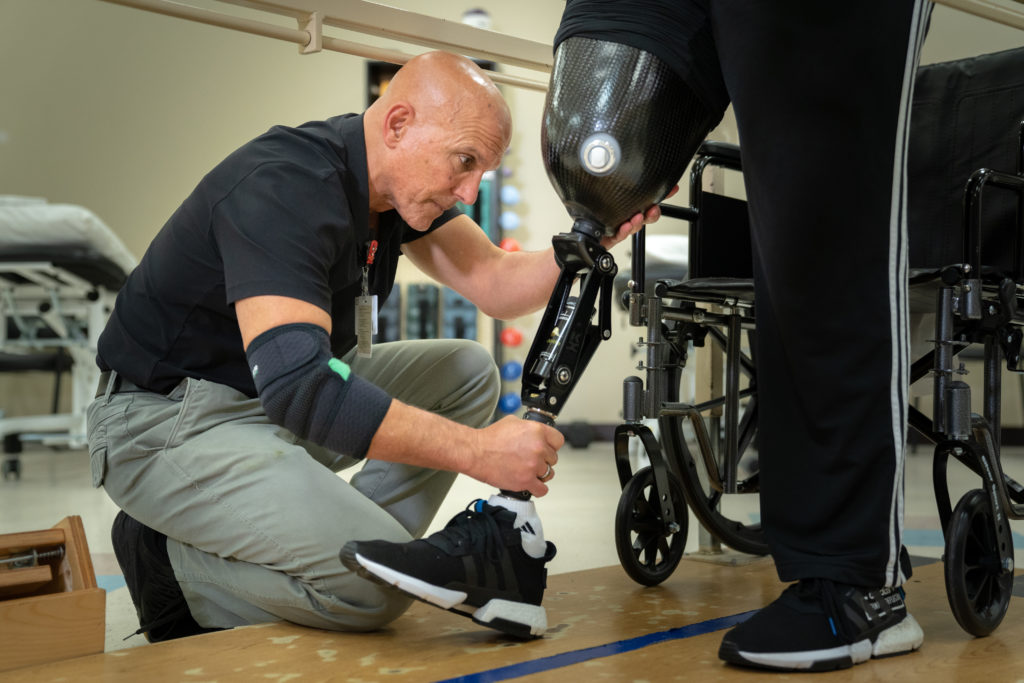 Nikki was able to see him for the first time. “He was in a medically induced coma but I thought he could hear me. His body was so swollen and he still had blood on his face. I asked the nurse for a washcloth and as I washed his face, I kept telling him it’s ok and that I was here. I prayed to the Lord to let him live for his son, Andre.”

By Tuesday morning, surgeons realized the shunt in his leg was not working properly. Jalen was becoming septic and his organs were shutting down. They told Nikki and Xavier they were going to have to amputate his leg in order to save his life. Neither Nikki nor Xavier wanted to make the decision to amputate but Xavier finally said “If I sign this paper, I need you to do everything you can to save his life.” The surgeon assured them he would. 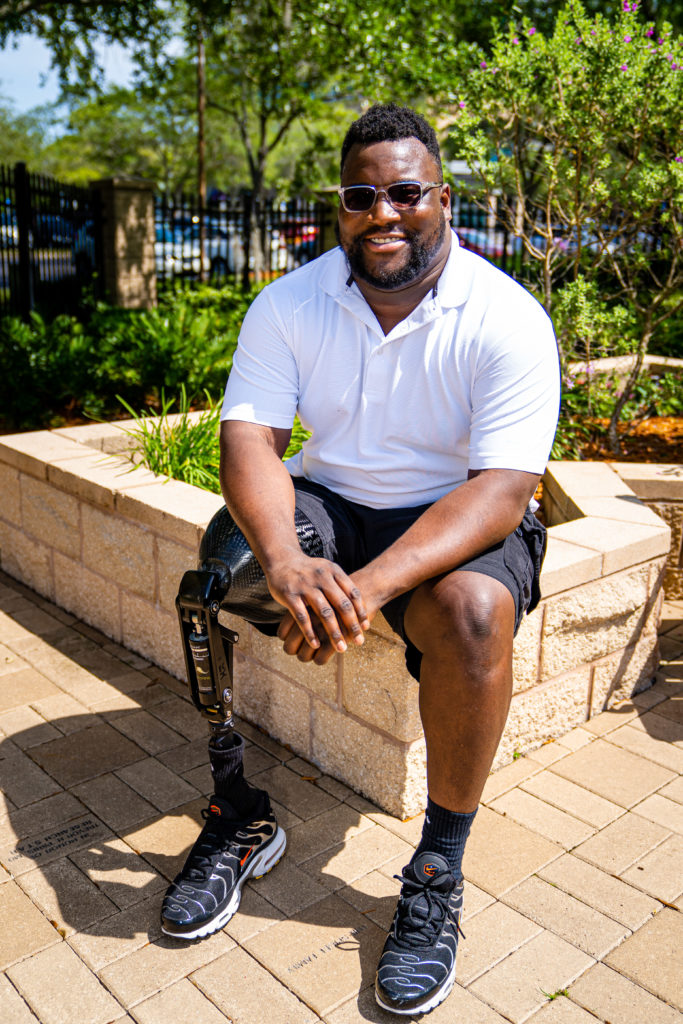 In eight days, Jalen had 10 surgeries, but the surgeon kept his word. They saved Jalen’s life. Day nine was one Nikki and Xavier both looked forward to and feared at the same time. Jalen’s breathing tube was removed and they began to bring him out of the medically induced coma. His parents were worried how he’d react to the loss of his leg. His nurse asked if he knew where he was and if he was ok. Jalen shook his head no and mouthed the word, “Mom.” They explained all he’d been through and with tears in his eyes, Xavier apologized for having to make the decision. Jalen shook his head and quietly said “Dad, it’s ok. You saved my life. I’m not mad at you.”

From that point on, Jalen moved from survival to recovery. He was transferred to Brooks Rehabilitation Hospital (BRH) late one evening. The next day, Jalen and Nikki met the team who would care for him. “I met Dr. Weiss that day and I was not happy with him. He was talking to Jalen and not to me, Mom,” joked Nikki. “I told him what I thought about that the next day. He shared all of his plans with me for Jalen and said he’d have him home in time for Thanksgiving.” 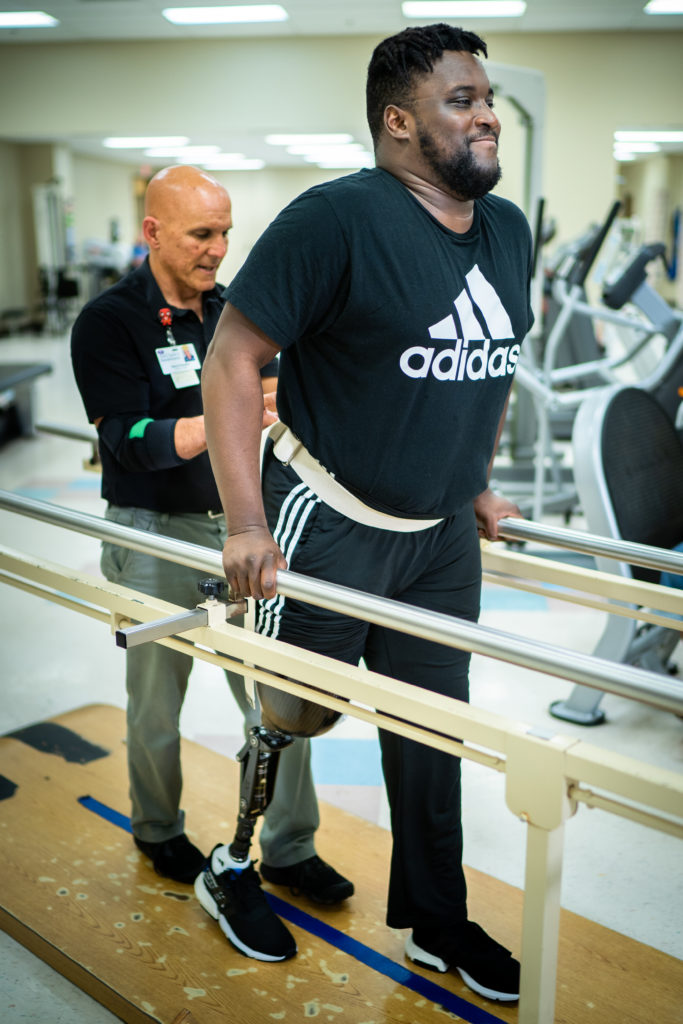 While at BRH, Jalen and his family were educated on his amputation. He and his therapists practiced transfers from his wheelchair. They worked on strengthening and balance. Since his hip was shattered, he wasn’t able to use a prosthetic yet. He was discharged the day before Thanksgiving, as promised, to home heath while his hip healed.

In March, his surgeon cleared him for outpatient therapy, however, the bones around his hip socket weren’t growing back fully yet. Dr. Weiss discussed this with Jalen’s surgeon and they continued non weightbearing therapy until June when he was ready to be fitted for his first prosthetic.

Getting the right prosthetic and the right fit can sometimes be a challenge. Steve Pompilio, Jalen’s outpatient physical therapist, patiently worked through the process with Jalen. “Every time he started making real progress, something would change with the fit of the prosthetic,” said Nikki. It was a personally frustrating time for Jalen and he started to become depressed. Dr. Weiss suggested he meet with one of Brooks’ psychologists who helped Jalen see that he wasn’t a victim, but a survivor. He also met other amputees and realized he wasn’t alone. 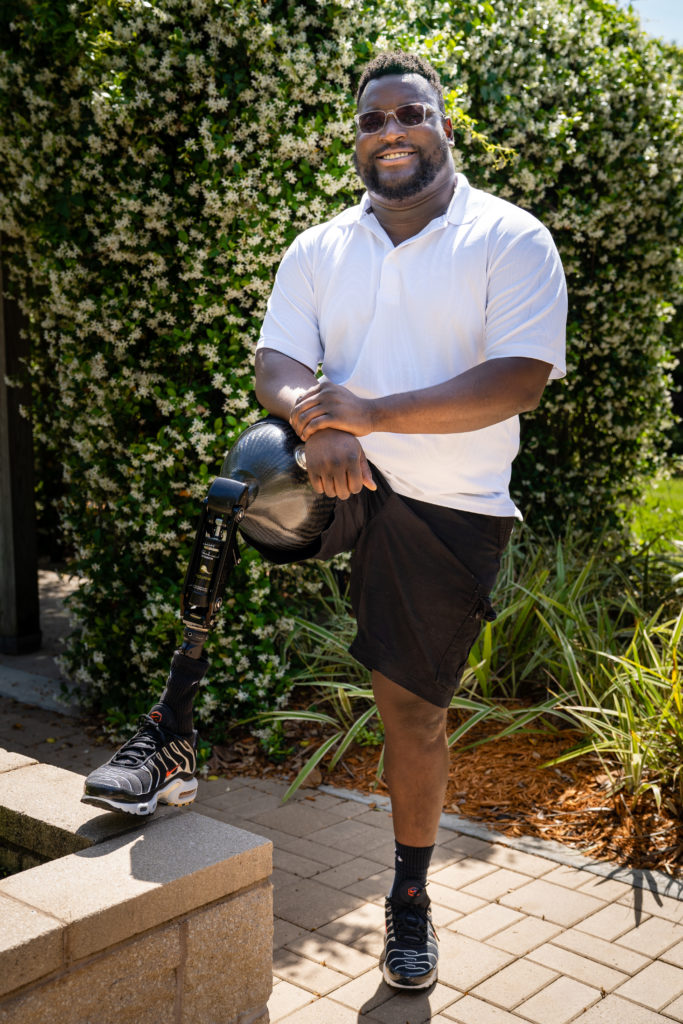 “As a mother and as a caregiver, my baby has shown me strength and tenacity. After everything he’s been through, he always pulls himself up and keeps going,” said Nikki.

At Christmas, Nikki’s gift was watching her son drive around the corner. Xavier helped him adapt his car to meet his new abilities. He started driving himself to therapy appointments. Despite the challenges, Jalen had gotten so good at walking with his prosthetic that he was beginning to surpass its effectiveness.

When Dr. Weiss saw Jalen in March 2020, he was amazed at his progress. He recommended an advanced prosthetic and is working with teammate, Geoff Hemmen from Hanger, to get Jalen a new prosthetic with a microprocessor in the knee to help him achieve even more of his goals. Unfortunately, due to Covid-19, Jalen will have to wait a little longer before he has that chance. In the meantime, Jalen is researching becoming a truck driver again.

“Dr. Weiss and Steve made it to where I know my baby is going to be ok. They’ve gone through the trenches with him. Every time we’re about to hit a wall, one of them astounds me. They refuse to give up on my baby and I know that makes him not give up on himself,” Nikki said through tears of gratitude. 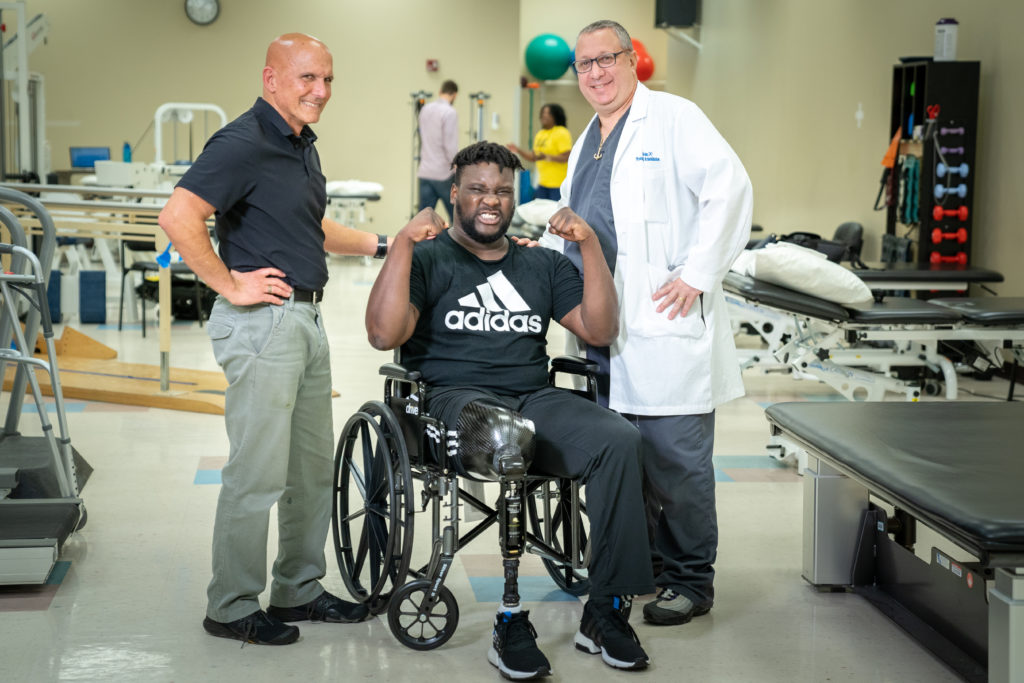