Rev. Tom Reeder Finds His Voice Again After a Stroke

Rev. Thomas Reeder is Rector of Christ Episcopal Church in Ponte Vedra, Florida, one of the largest Episcopal churches in the country. For a man like Rev. Reeder, communication is everything – from sermons and services to counseling, education and Bible study, the members of Christ Church and the many organizations and people it supports depend on his language abilities. Yet, in an instant, Rev. Reeder lost those abilities.

In June 2018, Rev. Reeder suffered a stroke. After his initial hospitalization, he spent six days as an inpatient at Brooks Rehabilitation Hospital. From the outside, Rev. Reeder looked good – he was alert and attentive and could move like he did before, with none of the paralysis or immobility that often accompany strokes. But something was very wrong. Rev. Reeder had difficulty speaking, writing and reading. The stroke had done its real damage through a different means: aphasia.

As defined by the National Aphasia Association, “Aphasia is an impairment of language, affecting the production or comprehension of speech and the ability to read or write. Aphasia is always due to injury to the brain – most commonly from a stroke, particularly in older individuals. But brain injuries resulting in aphasia may also arise from head trauma, from brain tumors, or from infections.” It’s very important to note that aphasia does not affect intelligence – just communication. 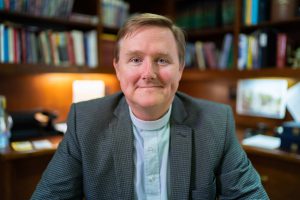 “I had a major stroke, but most every issue with it was language related,” said Rev. Reeder. “The day after my stroke, I only had one or two words. I could read some things, and not read other things. It’s like your inner monologue gets stuck inside. You can see the world going on around you, but you can’t participate.”

Jodi Morgan, the Brooks Rehabilitation Aphasia Center Manager, explains what it’s like.  “Imagine you’re suddenly dropped into rural Japan. You can’t speak the language – you can’t read it, write it or understand it when it’s spoken to you. Yet, you still have your IQ, you’re still the same smart, educated person you were before. You just cannot communicate. That’s aphasia,” said Morgan.

Morgan notes that aphasia affects more Americans than Parkinson’s Disease, muscular dystrophy or cerebral palsy – ailments that are more well-known. “Generating awareness about aphasia is crucial,” said Morgan. “People need to better understand it in regard to diagnosis, treatment, and how best to communicate day-to-day with someone who has it.”

The Brooks Aphasia Center is one of only a few of its kind in the U.S. Run by licensed speech-language pathologists and other specialists, the Center offers a community aphasia program, an intensive comprehensive program, family training and support groups. The community program is two to three days per week, five hours per day, and provides coordinated group activities. The Intensive Comprehensive Aphasia Program (ICAP) runs Monday through Friday, 25 hours a week for six weeks. The ICAP provides individualized therapy, specialized for the person with aphasia and their family.

Rev. Reeder participated in the ICAP first, and then the community program. Jodi Morgan served as the lead therapist for him during the ICAP. “Brooks uses whatever the patient needs to get them reconnected and back to work, if possible,” said Rev. Reeder. “Since my work was the Bible, that’s what Jodi used as part of her tailored approach. We also constantly practiced reading and talking out loud, as I would when preaching. ”

While in the community program, some of the attendees asked Rev. Reeder to lead a Bible study segment. “Having had a stroke helps you understand how to communicate with other stroke patients,” said Rev. Reeder. “Like anything dealing with aphasia, it took a lot of preparation. Everyone who wanted to participate could, regardless of their level of recovery. It was more free form, and more about the camaraderie.”

Rev. Reeder will tell you that he’s about 75 percent of his old self and hopes to recover more. He has returned to Christ Church, and also works to raise awareness about aphasia. 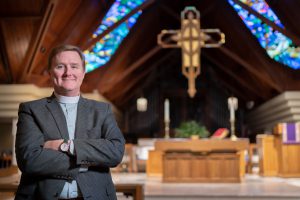 “My goal is to talk with a new visitor to the church without them being able to tell I had a stroke. The two Brooks aphasia programs made all the difference, I can tell you that,” said Rev. Reeder.

Morgan feels his recovery and return to work were nothing short of miraculous. “I always thank Father Tom for sharing his story and advocating for those with aphasia. I could not be prouder of him,” said Morgan.

“Jodi believed in me,” said Rev. Reeder. “She has a method of unlocking people’s words. I don’t know how she does it. I had started to get some words back, but Jodi gave me fluency. I wouldn’t be sitting here doing my job without her. To me she was a miracle worker.”