In June 2019, Brevard County Sheriff’s Deputy Chris Streiff was training intensively with the SWAT Team. He was enjoying a typical day of boating with his brother at the Sebastian Inlet, something they did on a weekly basis. Toward the end of the trip, Streiff had an accident that he can’t completely recall. “I don’t remember much about the accident. Either I fell, slipped or dove into the water and it was very shallow,” said Streiff. His wife, Wyndy, was in Pennsylvania with family at the time and received an unthinkable call that her husband had an accident. As Streiff’s condition was critical, the medical team advised her not to fly to Florida, but to drive, so she could be accessible to make decisions when needed.

After an excruciating 12-hour drive, Wyndy made it back to Florida to be by her husband’s side. “With him being in law enforcement, I was always so nervous. I would worry so much that he’d get hurt on the job. But he got injured doing something that we do weekly.” Wyndy soon learned that her husband had sustained a spinal cord injury due to fractures in his cervical spine at levels C6 & C7. He quickly underwent surgical stabilization of his spine. He required a ventilator to breath and a tracheostomy tube, as well as a feeding tube for medications and to sustain his nutritional needs. 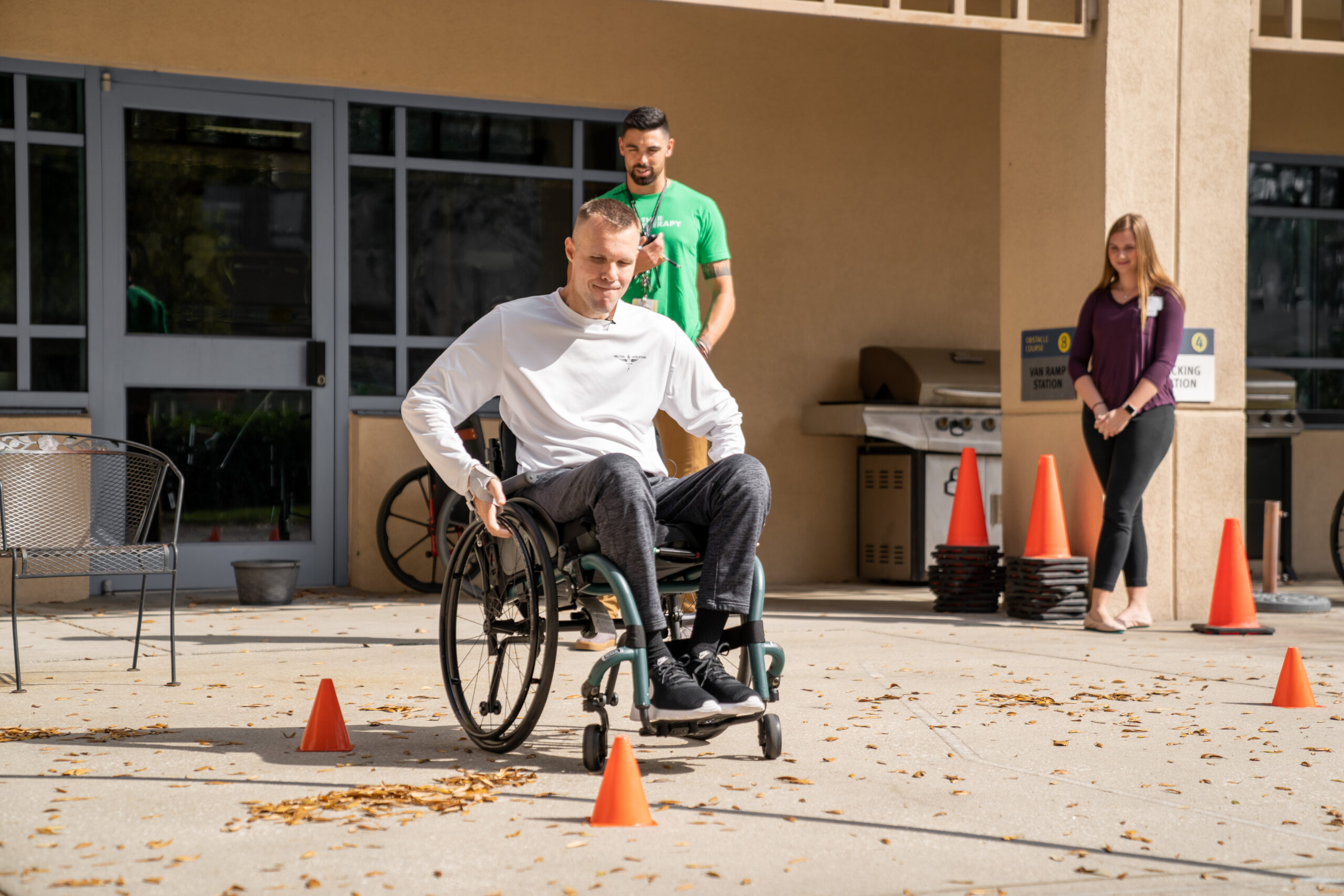 While an inpatient at Brooks Rehabilitation Hospital, Chris was able to quickly make progress with both his medical stability and in therapy. By the time he was discharged, he was able to have both his tracheostomy tube and his feeding tubes removed – he was eating and breathing completely on his own. With Brooks’ interdisciplinary teamwork approach, Chris was able to safely discharge from the inpatient to the outpatient setting in just shortly over a month.

With Chris and Wyndy residing in South Florida, local housing accommodations played a critical role in his continued recovery. Helen’s House, named in honor of Brooks founder, Dr. Brooks Brown’s wife, Helen Brown, is a nonprofit hospitality house for patients and their families and was critical in Chris’ participation in the newly developed outpatient program. “Being at Helen’s House is great because everyone’s experience may not be the same but everyone is going through something similar. You definitely have support here. The setting was definitely well thought out,” said Wyndy.

Patients in the SCI-D program participate in half- or full-day treatment for a maximum of six hours a day, five days a week, for an average of 6-12 weeks. Once enrolled in the SCI-D program, patients are evaluated and given a personalized treatment plan which includes one-on-one therapy sessions, group-based interventions and classes, education and specialized services, as needed.

Chris was only able to use a few muscles in in arms, limited trunk stability and had no active hand movement when he began the SCI Day Treatment Program. He worked on stabilizing his blood pressure and improving his tolerance for upright positions, while beginning participation in his basic activities like eating, dressing and managing his wheelchair.

While in the SCI-D program, Chris progressed to complete all of his basic care activities independently, completed transfers to his wheelchair with only supervision for safety. His abilities at the end of program had improved beyond the best expectations for someone with his level of injury.

“Chris had the best work ethic of any patient I had ever seen. Day in and day out he pushed himself to near failure in order to grow his skills. I was proud to be his occupational therapist throughout his SCI Day Treatment stay,” said Ryan Patterson, MOT, OTR/L, BCPR.

“Three days a week my therapist comes over here to Helen’s House and helps with bed mobility. He brainstorms and tries to make things easier for us,” said Streiff. While at Helen’s House, Streiff also worked with the Assistive Technology Program, a program to incorporate assistive technology and adaptive equipment in order to increase the functional independence of patients in everyday activities. “Michael [Assistive Technology Specialist] can help me be more valuable to the Sheriff’s Office with my injuries. He will actually help me get back to work rather than losing my job,” said Streiff.

When the world began to slowly shut down due to COVID-19, Chris and Wyndy returned home. Chris will be working for the Brevard County Sheriff’s Office again, but in a new role. 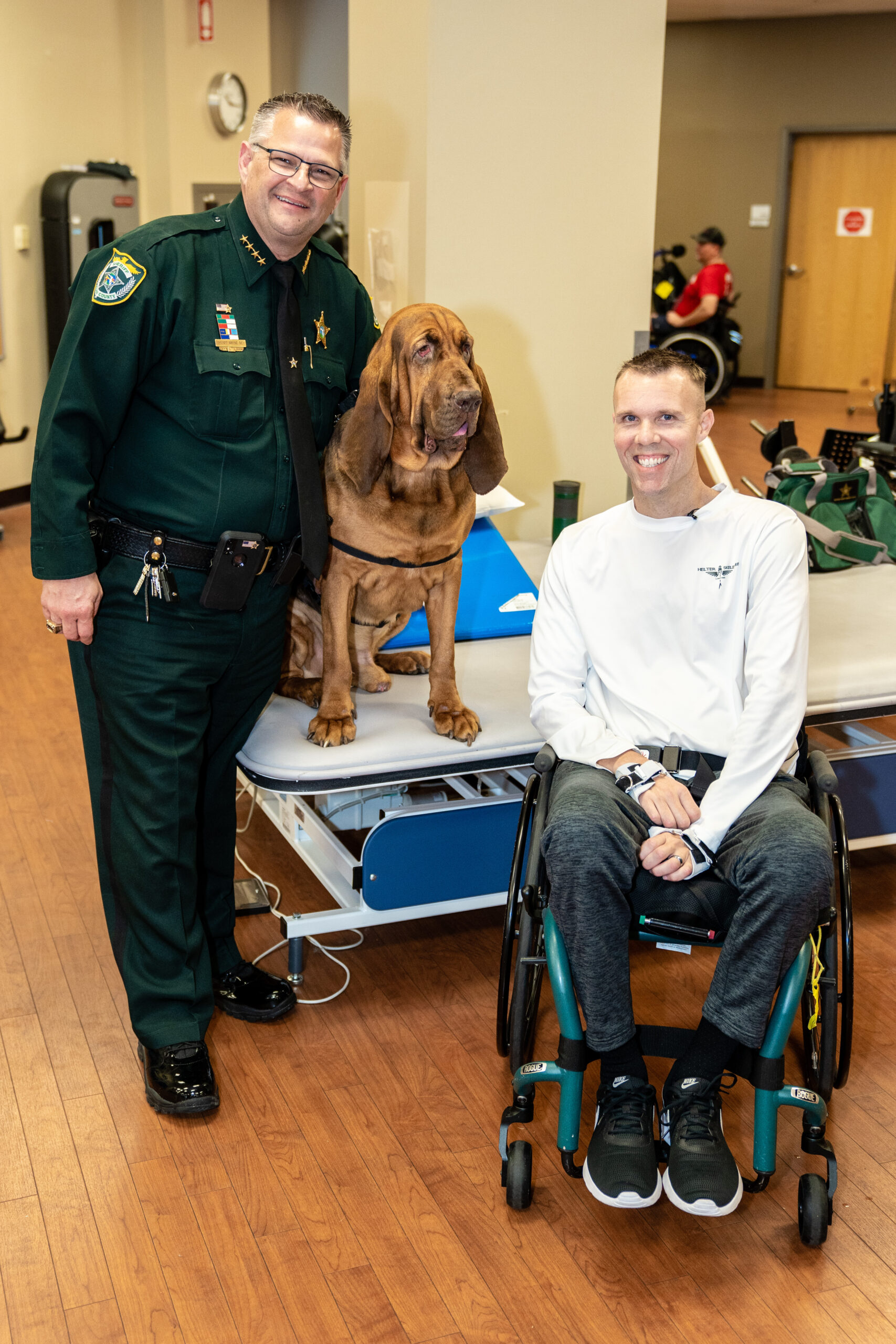 “Chris demonstrated his resilience and dedication to give it his all, every single day, from the very beginning. It wasn’t easy, especially in the beginning when facing not just functional challenges but also a variety of medical issues. I had the pleasure of working with Chris from when he was an inpatient at Brooks on our spinal cord injury unit, to overseeing his progress in our outpatient SCI Day Treatment Program and now finally as an outpatient in our clinic setting now that he is back at home with his family. Chris has shown what can be accomplished with persistence and true grit, with the support of an amazing family, and I look forward to continuing to work with him throughout the upcoming years,” said Geneva Tonuzi, MD, Medical Director, Spinal Cord Injury Program & Spinal Cord Injury & Related Disorders Day Treatment Program (SCI/D).