Glen Allen was doing yardwork like he did most every Saturday. After about two minutes using the weed eater, he walked in the house and called for his wife Amanda. Amanda found him unresponsive on their couch.

Glen wasn’t breathing so Amanda frantically called 911. She did CPR until the fire department, who were first on the scene, arrived seven minutes later. After 20 minutes, an ambulance arrived and the EMTs were able to stabilize him and get him to the emergency room.

“His chart said initially that he had a heart attack, but after testing, there were no signs of that or a stroke. They think he inhaled something or had an allergic reaction to something that caused a bronchial spasm which stopped his breathing and his heart,” said Amanda.

While the cause may be unclear, the result was an anoxic brain injury, a lack of oxygen to the brain. Amanda was able to be with Glen in the ER, but when they moved him to the Cardiac Care Unit, there were no visitors allowed due to COVID-19. Amanda could only have calls and video chats with her husband for the three weeks he was in CCU. This was a challenging task considering he was only able to blink. Amanda and his care team kept looking for little signs of awareness. One night on video, it looked like Glen winked at Amanda so she began to tease him, “Are you flirting with me? Was that a wink I just saw?” Glen then winked again with purpose. It was the first sign that Glen was still there.

Their favorite nurse pushed to get Glen transferred to inpatient rehabilitation for intense therapies. Amanda had two options – a facility in Atlanta or Brooks Rehabilitation in Jacksonville. She asked the nurse which she should choose and was told whichever one could get him in the fastest. When both had a bed available on the same day, Amanda chose Brooks because, “Brooks felt more familial. The nurse liaison who assessed Glen wasn’t pushy at all. They gave me the impression that they really wanted to help us. We wouldn’t be just another patient to them.”

Once Glen was transferred to Brooks, Amanda was finally able to stay in his hospital room with him. On his first day of therapies, it took four people to get him from the bed to a wheelchair. He had issues with his vision and he was not able to make any new memories.

Kenneth Ngo, MD, the Brooks Rehabilitation Hospital Medical Director, was his attending physician at Brooks and led his rehabilitation team. Dr. Ngo recalled, “The injury to Glen’s brain was quite severe. At the time of his arrival to Brooks, he was in a confused, agitated stage, and did not even realize that Amanda was his wife. He had difficulty understanding and talking.” Glen’s therapy team was able to get him talking and increasing his mobility soon after his arrival.

Due to the severity of injury to Glen’s brain, the team questioned his ability to see. Dr. Katelyn W. Jordan, OD, manager of the Brooks Center for Low Vision, evaluated Glen and she was able to determine that Glen had better than 20/20 vision, but that his brain was having a difficult time interpreting the signals. They worked to improve that.

Glen also worked to improve his cognitive abilities. “Most people have a linear timeline for memories. Right now Glen just has a bucket of memories. He can pull things out but not recall when they happened,” said Amanda. Glen’s hospital room was filled with visual clues to help him remember where he lived, where he worked and where Amanda might be.

When asked about his therapies, Glen said, “they were as hard as they should be.” He and Amanda both agreed that the confidence the staff have instills a sense of peace in the patient and family. “I feel totally prepared to care for Glen at home now. They helped me feel confident too. There was so much communication between the doctors, therapists and nurses that everyone always knew what was going on with Glen,” said Amanda. 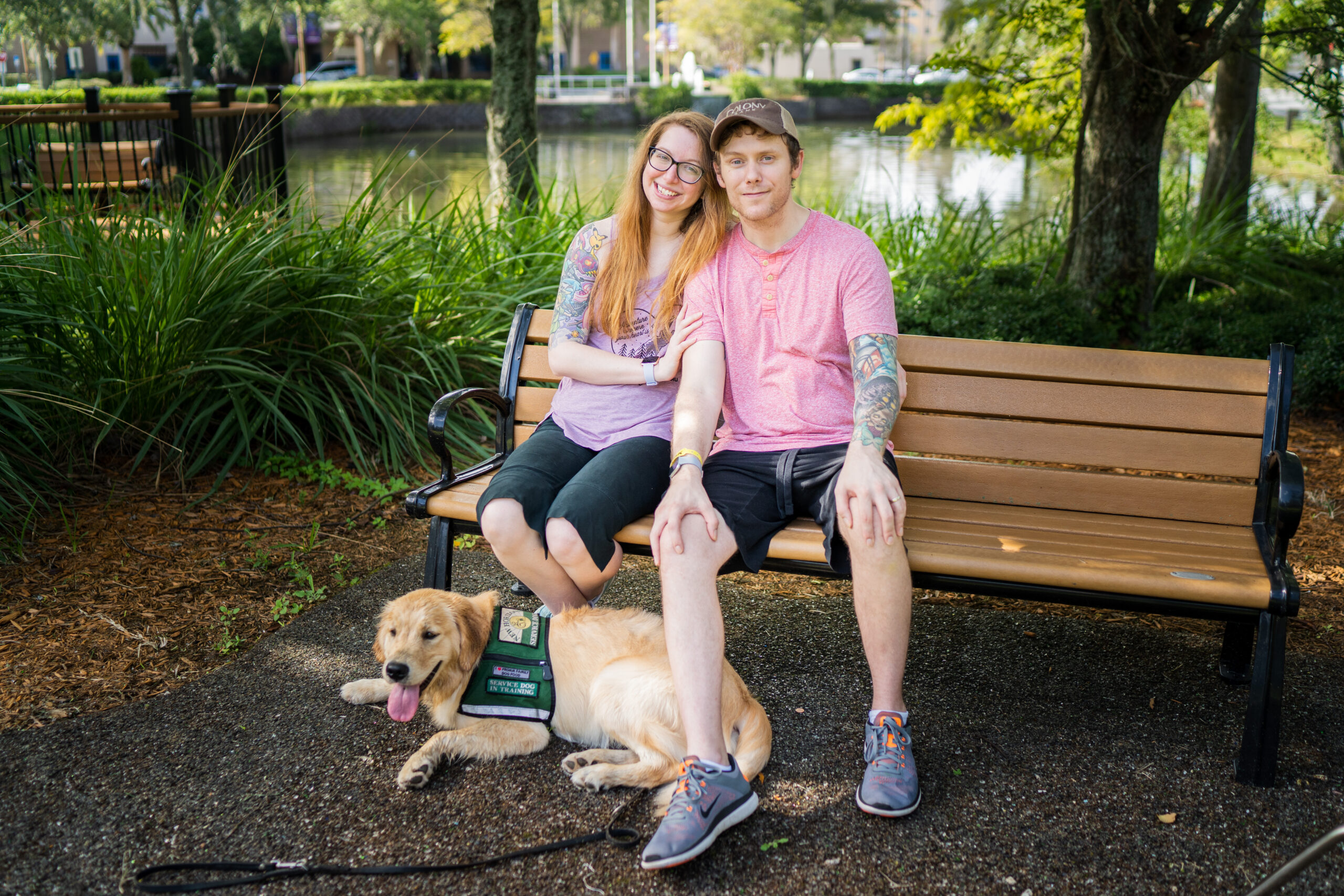 Despite the COVID-19 pandemic, having Amanda by Glen’s side was pivotal to his recovery. “Witnessing Amanda’s support by Glen’s side warms my heart. They are the representation of a beautiful marriage, truly modeling their vows of ‘in sickness and in health.’ In healthcare, oftentimes the attention is solely on the patient, but at Brooks, we care for the patient as well as the whole family. Helping Amanda through the coping stages and providing her with tips to stay healthy was crucial to Glen’s recovery,” said Dr. Ngo.

After six weeks at Brooks, Glen got to return home to Savannah and his two dogs. While it used to take four people to get him out of bed, he now pops right up and walks himself. Through the many weeks of hospitals and therapies, Glen never lost his personality, sense of humor or love and support from Amanda. Their journey of recovery will continue on to the Brooks’ outpatient Brain Injury Day Treatment Program.

Dr. Ngo came to Brooks from Wisconsin, where he completed his residency in Physical Medicine & Rehabilitation at the Medical College of Wisconsin. He received his medical degree from the University of Wisconsin School of Medicine and Public Health, and completed his internship at the Michigan State University. He is Board-Certified in Physical Medicine & Rehabilitation, with subspecialty board certification in Brain Injury Medicine and has been at Brooks Rehabilitation since 2010. Dr. Ngo provides care for patients with complex, catastrophic neurological and other brain injuries, both inpatient and outpatient through the entire continuum of brain injury rehabilitation.