After driving a friend to a job interview, Tyler Woodard was t-boned leaving the parking lot. His mother, Juliette Woodard, received the call no parent wants. They were taking her son to UF Health Jacksonville, the trauma hospital, not the closest hospital. She knew that was a bad sign.

When she arrived, she wasn’t sure if Tyler was alive or dead. She found Tyler’s father, who told her that Tyler was in surgery. Several agonizing hours went by before they got any information. Late that night, they learned Tyler was in critical condition with internal bleeding they were trying to stop. Doctors expected him to wake up the next day, but when he didn’t, they ran additional tests. An MRI showed the accident caused a brain injury. “They explained that when you have a jell-o mold and shake it, the jell-o never goes back together in the same way. That’s what happened to Tyler’s brain” said Juliette.

Juliette was given three options. She was told she could 1) take him off life support, 2) leave him on life support with a do not resuscitate order or 3) do everything to sustain his life. Juliet chose option three and prayed.

There was not much change in his condition for 18 days until Tyler’s nurse randomly asked him to give her a thumbs up. And he did. The nurse ran to tell Juliette the exciting news.

A week later, Tyler was transferred to the Disorders of Consciousness (DoC) Program at Brooks Rehabilitation Hospital. This specialized program, which began in 1999, was specifically designed for patients in a reduced or minimally conscious state following a neurological injury or illness. The purpose of the DoC Program is to provide an accurate clinical diagnosis through comprehensive evaluations by specially trained doctors and professionals. Each week, patients participate in 5 – 6 days of physical, occupational, and speech therapy/cognitive therapy which will consist of a data-driven approach. The primary goal of this highly specialized program is to discharge each patient back home, so training and education for family is also a main component.

“Once we got to Brooks I was just like, Oh, thank God, because everybody was so upbeat. So positive, no one ever said a negative thing,” said Juliette.

There weren’t drastic changes at first, but Tyler was slowly coming back. After a month, Tyler spoke for the first time. “And his brother was so excited because it happened three days before their birthday on April 16. And his birthday wish was to hear Tyler tell him happy birthday,” said Juliette. “Now even ‘ouch’ is music to my ears.”

Tyler made steady progress from that point forward. When Tyler was admitted, he couldn’t have any food by mouth. He was eating double portions by the time he discharged. In addition to his cognitive challenges, Tyler also broke his pelvis in the accident and wasn’t able to put any weight on his right side until the end of May. But on June 4, three months after his accident, Tyler was discharged home. He was able to walk through his front door.

Tyler said, “The time at Brooks was great. They really care. They treated me like I was their family.”

Tyler met Dr. Laura Wulff for a neuropsychological evaluation in early August of 2020 to help determine if he was able to participate in an intensive and comprehensive rehabilitation program, the Brooks Brain Injury Day Treatment (BIDT) program. He indeed was ready. The BIDT program offers a combination of group-based cognitive therapy services with individual therapy services (i.e., physical, occupational, speech-language, and psychotherapy). The therapists in the BIDT program observed Tyler going from being quiet, confused, and struggling to remember details to hard-working and up-for-a challenge. He appeared to thrive in his interaction with others, and he went out of his way to make friendships and encourage other patients in the program. His personality started to shine from a nice smile to introducing the therapy team to his loved ones, particularly his nieces, nephew, and his pet bunnies including OGB (“original gangsta bunny”).

In fact, Dr. Ngo once questioned who the team were talking about during team conference because Tyler was no longer quiet with a flat affect. As Tyler was finishing up in the BIDT program (and transitioning back to individual therapies), he shared with the therapists and the other patients that his view of the accident had changed; he shared that he saw a new beginning to life rather than focusing on how the accident occurred. Tyler’s mom was such a treat to work with as well – the case manager of the program (Erika Albertie-Young, LCSW) commented, “She is a prime example of how much family involvement can positively impact a patient’s recovery.” 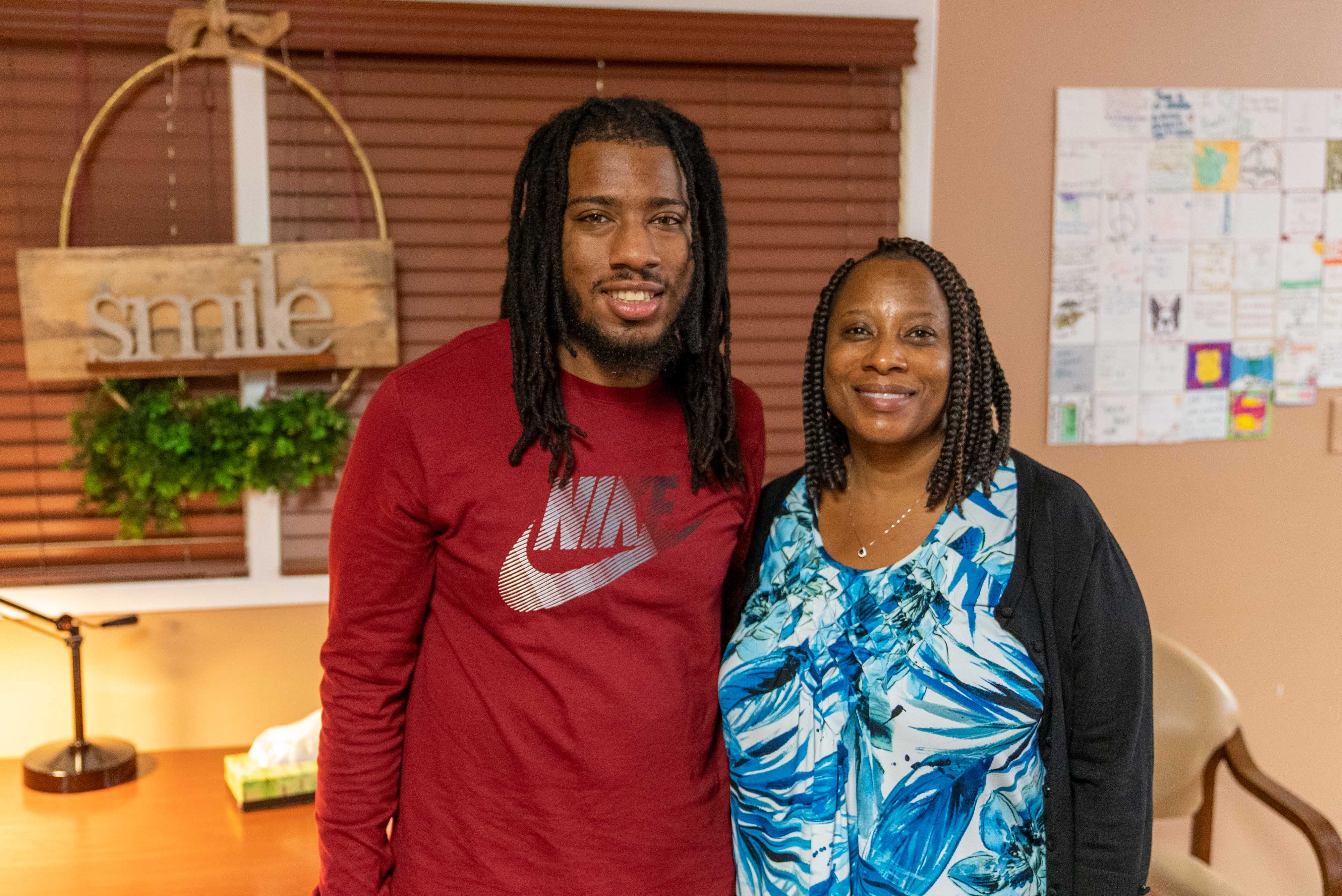 “I lived here all my life and I’ve seen Brooks. I knew it was here but I never knew all of this amazing stuff was happening. That people’s lives were being transformed this way. I mean, when doctors tell you that your child may never walk and can never talk again, and then you start to see that happening because of the therapy that he’s getting and the things that people are doing. it’s just so comforting because it wasn’t like they were talking doctor to patient, it was like mom to mom. They were so relatable and so caring. And it wasn’t that they just did it for Tyler. This is what they do for each and every patient that comes through there. They get them back to the best quality of life that they can. I would recommend Brooks to everybody,” said Juliette.